Hey guys, don't eat anything unless you KNOW what it is - ask a friend, do your research. There are many poisonous look-alikes that could ruin your day. This is a source of information but we recommend doing your own thorough research before putting anything in your mouth. 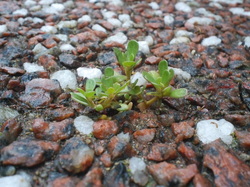 Purslane
This succulent plant can be found all over downtown Toronto during the Summer months. We have also found it as far north as Parry Sound and as far south as Southern Mexico. It prefers to grow without much competition and a lot of heat. You will see it growing between cracks in gravel and asphalt or in abandoned planters for this reason. Depending on the space available, Purslane can be a small plant with 5 to 7  1cm long tear drop shaped leaves growing on a short succulent stem or +10  4cm leaves growing on many longer succulent stems forming a bush that grows on for feet. It can have small (1/2cm diameter) yellow flowers through the whole season though predominantly late in the season turning to very small black seeds (similar to poppy but smaller). Older stems will produce flowers earlier in the season.

The Leaves, and the stems are edible. This is a mild and succulent wild plant that everyone can enjoy. When cooked it looses it's "crunch". This plant contains Omega3 fatty acid, vitE and glutathione (glutathione is "an antioxidant, preventing damage to important cellular components caused by reactive oxygen species such as free radicals and peroxides." Thanks Wiki). This nutritional information and more can be found in Edible Wild Plants, see our Recommended Reading under Wild Edibles.)

We eat Purslane fresh by itself, on sandwiches, in salads, pickled like a cucumber (recipe to follow), stir fried and delicious in soup. David and I recently agreed we will no longer purchase pickles, Purslane is the new pickle. We substitute pickled Purslane in recipes where we would use pickles ie. potato salad or as a topping of bean burgers (these are so good, cheap and easy to make. Recipe to follow). Have you guys tried Purslane? Let us know.


Purslane has a poisonous look alike which is not as succulent and has a red dot in the middle of each leaf (most of the time). It reminds me of the plants from Super Mario, with the petals growing like rungs on a ladder as apposed to Purslane's petals which grow in a formation similar to flower petals. This plant will make you sick so Purslane should only be picked for consumption after careful research! Photo below. 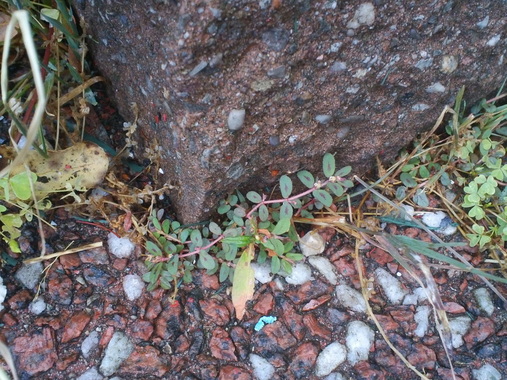 Purslane's POISONOUS look-alike. DO NOT eat this plant. 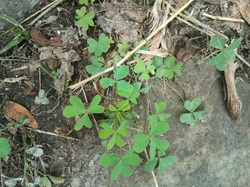 Oxalis aka Wood Sorrel
This zesty plant is most commonly found at the base of trees, in cities to woods, roadsides or jungles all over North America. It is very easy to find and identify and a great lemony snack while biking, hiking or gardening. It can be a small plant with <1cm heart shaped leaves or >3cm leaves depending on the environment it is grown in. The Oxalis that grows wild in my garden is much nicer than the Oxalis we eat off of the side of the road further North.

Oxalis resembles clover (Clover is also edible but less palatable). Oxalis is distinguishable from clover by it's heart shaped leaves. Oxalis' leaves can range from yellow to many shades of green and purple. You can also eat the small, yellow (1cm) flowers of Oxalis and it's pointy seed pods which are very sour and crunchy hmmm mm good!

We eat Oxalis for fresh snacking, soup (recipe to follow), sandwiches, salad and dessert sauce (recipe to follow). Our pooch Milo can often be found grazing on Oxalis although he prefers Mustards ( ie. Garlic Mustard) when available in the Spring. 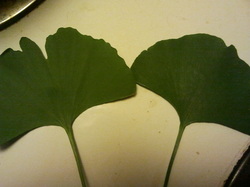 See also our blog for more on wild edibles we encountered so far.